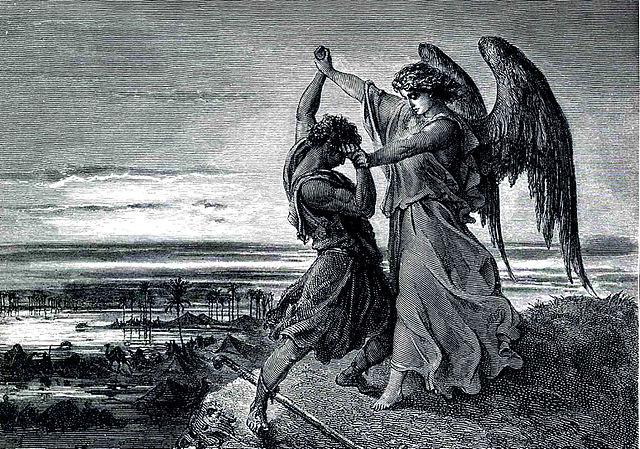 So Jacob was left alone, and a man wrestled with him till daybreak.  When the man saw that he could not overpower him, he touched the socket of Jacob’s hip so that his hip was wrenched as he wrestled with the man.  Then the man said, “Let me go, for it is daybreak.” But Jacob replied, “I will not let you go unless you bless me.”  The man asked him, “What is your name?” “Jacob,” he answered.  Then the man said, “Your name will no longer be Jacob, but Israel, because you have struggled with God and with men and have overcome.”7Ge 32:24-28 NIV  8You can read the full account in the book of Genesis starting in Chapter 25 at verse 21.

Consider: Jacob was born holding his twin brother Esau’s heel, and his name is explained as meaning “holder of the heel” or “supplanter”9supplanter – one who wrongfully or illegally seizes and holds the place of another., because he twice deprived his brother of his rights as the firstborn son.10Ge 27:36a NIV  Esau said, “Isn’t he rightly named Jacob? He has deceived me these two times: He took my birthright, and now he’s taken my blessing!”

My Prayer:  Lord, teach me fight and like Jacob not give up until you bless me out of my sinful ways.11Mt 11:12 NIV  From the days of John the Baptist until now, the kingdom of heaven has been forcefully advancing, and forceful men lay hold of it.